In the last month I’ve published twice in our campus newspaper, Nouse

In the last month I’ve had two articles printed in the student newspaper, Nouse. Over the last year I’ve been collecting data on student union election candidates, and it was fantastic to pull the findings together.

These are based on the same underlying data but the latter post gave me two weeks to make a deeper analysis. I found it a tough but exciting learning curve to collect the data, do analysis and publish it with the fantastic team at Nouse. So many thanks to Luke Rix-Standing (Editor), Finn Judge (Deputy Editor) and Amelia Clarke (News Editor).

Yes, published in a paper newspaper.

It might seem strange that a Computer Scientist is publishing on paper. I disagree: electronic media is growing hugely in appeal, and Kindles have eaten much of my use of paper for reading. But media is a diverse field and if you want to reach people in a particular but diverse organisation the organisation’s own newspaper is a good way. Something I need a better process for is my method of analysing data: Google Sheets charts don’t suffice.

I set out to try and find out more about something public that wasn’t being looked at. I’ve developed an impression that a lot of real-world issues are widely known anecdotally, but nothing gets done because you can’t prove anything. As such, demonstrating an issue in a deep, quantitative analysis can be a useful step to arguing and driving for change.

To an extent this belief is an artifact of my own mindset. Where possible I like to argue from evidence. Some years ago I participated in government/civic data hackdays, and that interest is still around under the surface.

I’m a Course Rep in the Computer Science department at York, responsible for acting on student feedback and improving the student experience. A lot of Course Reps probably just argue for things they believe, and resolutely keep arguing until something is done or they get worn out. My approach to many issues is along this axis, but if something seems harder to get done I turn to an analytical mindset. This worked for highlighting problems with a Machine Learning class I took last year, after 4 years of the problems seeming to be ignored. 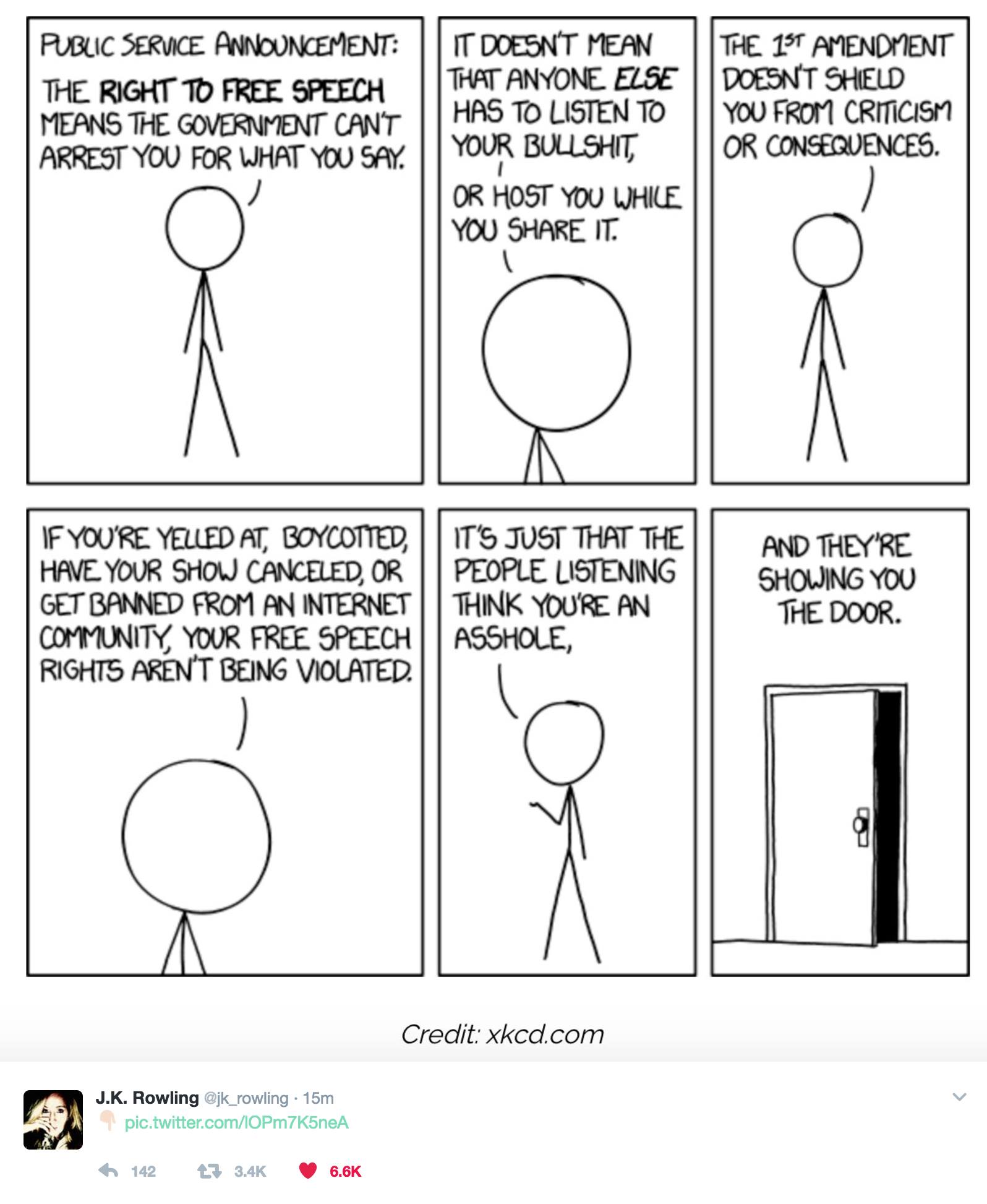 This cartoon is XKCD #1357, posted by J.K. Rowling on Twitter. I felt rather inspired by it. I believe that many anti-intellectual and illiberal attitudes are being used right now, and one is the concept everyone has the right to say their fill in your community.

I very much disagree: hate speech and hate groups are not harmless; normalising their speech is a way to having us listen; and many of these groups are privileged and are not genuinely struggling for a platform (hence why their complaints are so loudly audible despite the supposed crushing censorship.)

See my replies to Kragen at It’s just that the people listening think you’re an asshole and they’re showing you the door.

My blog will be relatively low-quality writing for the time being. I’ve never honed my skills at writing until now, which means that iterating on a blog post can be a slow and long process. My hope is that the (limited) editing I do will feed into my new writing, and my process will slowly improve. We’ll see whether this works out, but it’s the Growth Mindset I’m taking.