As I write this it is Day 6 and quite appropriately I’m sitting by 6 fountains in Amsterdam’s Vondelpark. 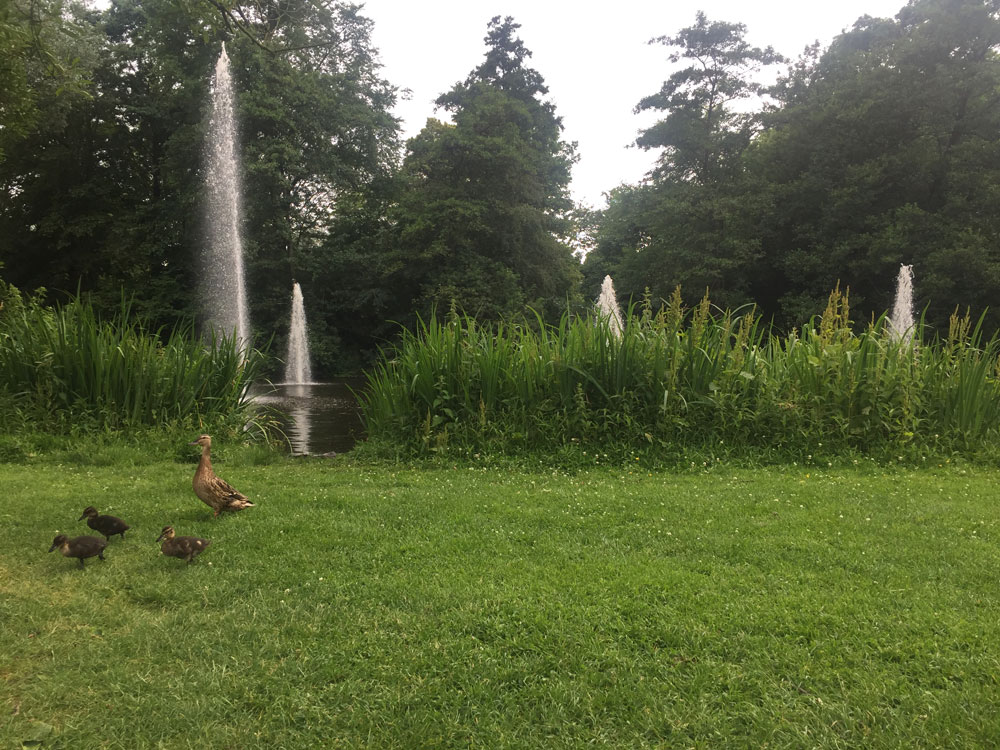 I have a quiet couple of days before reaching Berlin, so it’s time to catch up with my writing starting with Day 4’s journey from Paris to Amsterdam.

First thing on Day 4, I needed to get some eyedrops. I suffer from dry eyes sometimes and they’re handy to have around. For more or less the first time I didn’t even try to ask for them in French - I thought the name would be far too esoteric to guess at. But they have a name I could have grasped at: l’hydration les yeux.

Second we caught a taxi from our hotel to Gare Du Nord, Paris’ north-bound station. The taxi was a Tesla and, while a big LCD screen is cool, I was surprised how simple its interior decor otherwise is.

With about an hour to spare I found a few things to do. I got a sausage baguette and what I’d expected to be a Tartalette Citron. As it turned out I think they gave me an apple one by mistake, but it still proved a delicious farewell to Paris. I helped a few London-bound Americans who were staring at the Eurostar trains unsure how to access them - the answer being to turn right, walk 100m down the concourse to an out-of-sight escalator, and go upstairs (really rather tricky to spot.)

I had a pretty long chat with a few Americans who were also getting lunch. Originally we started talking because the three of us seemed to be prime targets for beggars - the extent of it in Paris was honestly a surprise. For better or for worse, my experiences at the Louvre have me extremely wary. But it was interesting to talk to fellow travellers.

I was on the 12:28 Thalys service from Paris Gare Du Nord–Amsterdam Centraal, a 3h51m journey by modern high-speed train. The overhead baggage racks could contain remarkably luggage, and then I somehow managed to sit in the seat in front of mine which was rather embarrassing.

Heading North towards Lille and the Belgian border was quite similar to Day 1’s Eurostar journey, although I’m not sure if we were on the same train tracks. Our first major stop was Brussels-Midi (seen below), roughly 18 hours after a failed/foiled bomber at Brussels-Centrale. 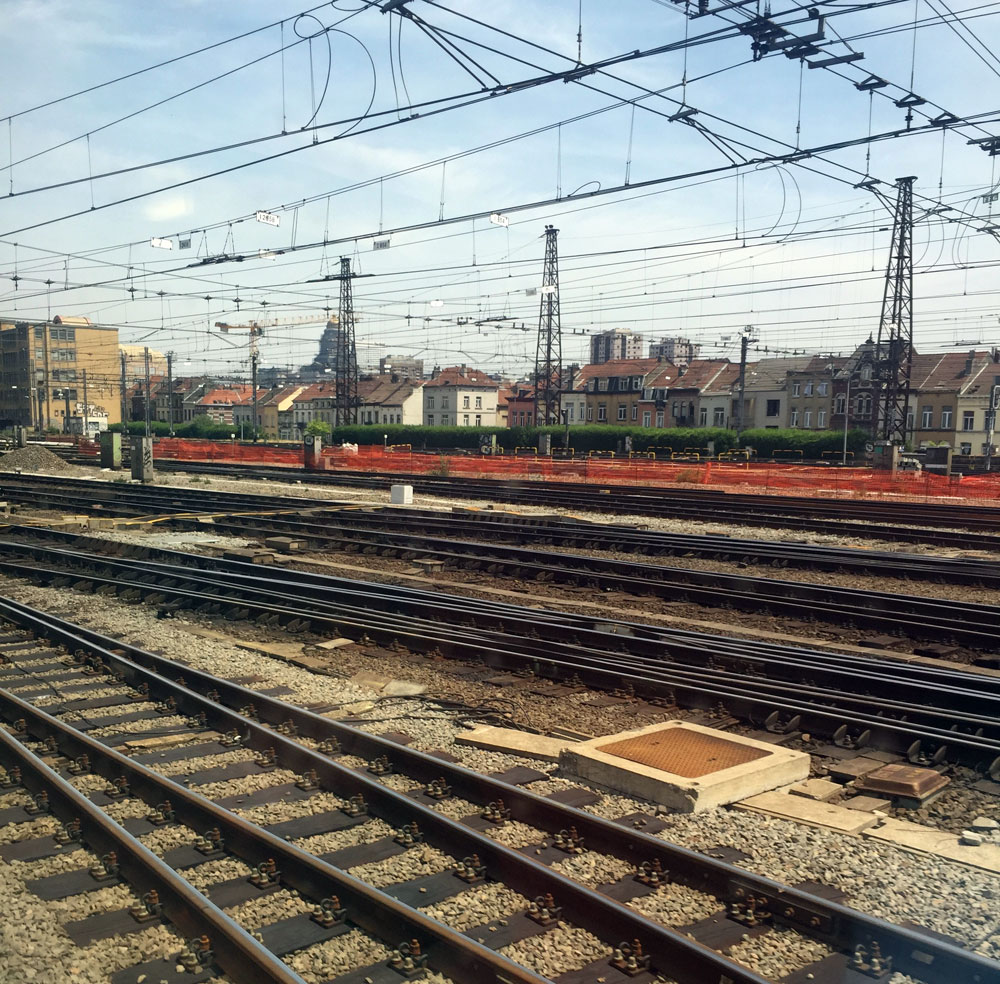 My position on terror attacks largely focuses on the actual risk. Few terrorist attacks in the West have come close to existential damage to their people or infrastructure, and thus it is generally safe to disregard them day-to-day. But the risk to society seems somewhat greater—the media profile and political urge to take some sort of action about even the smallest attack is vast. Carrying on and keeping calm seems the immediate way to counter that individually.

Heading on into The Netherlands I received my third new reason to thank the EU of my trip: a text from Vodafone taking credit for no roaming charges and my data/texts/minutes working throughout the EU. This only came into force last week and has made my trip far easier, cheaper and perhaps safer than it otherwise would have been!

The final leg to Amsterdam was very cute. The fields with regular drainage ditches reminded me of the Norfolk Broads only on a fantastically larger scale. The motorways and a lot of the houses seemed surprisingly reminiscent of UK suburbia. Something eye-opening was the train crossing a large body of water by bridge and immediately on the other side going sharply down below the waterlevel. 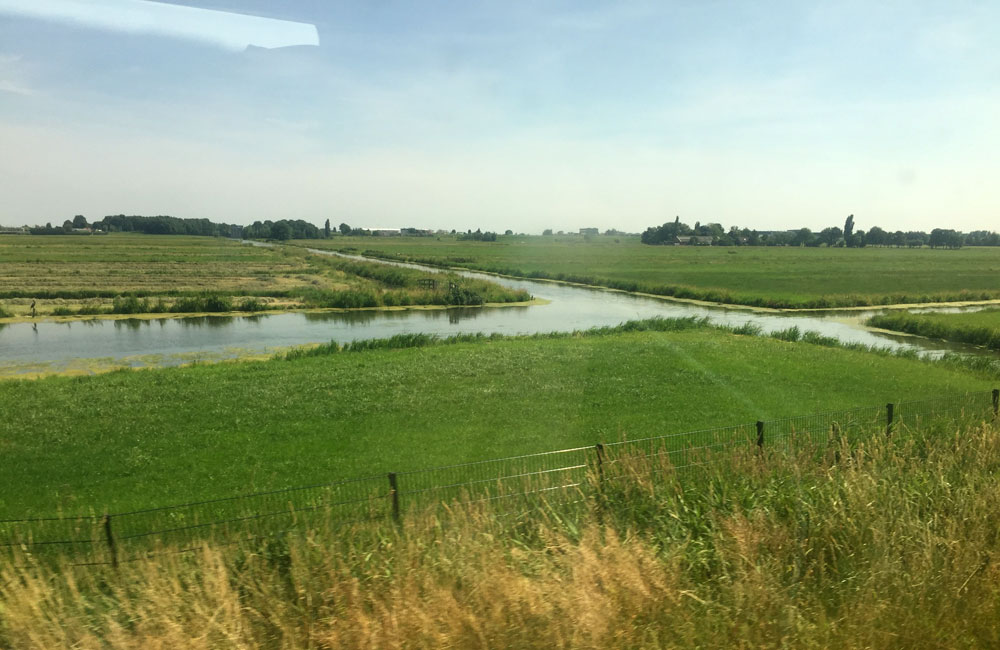 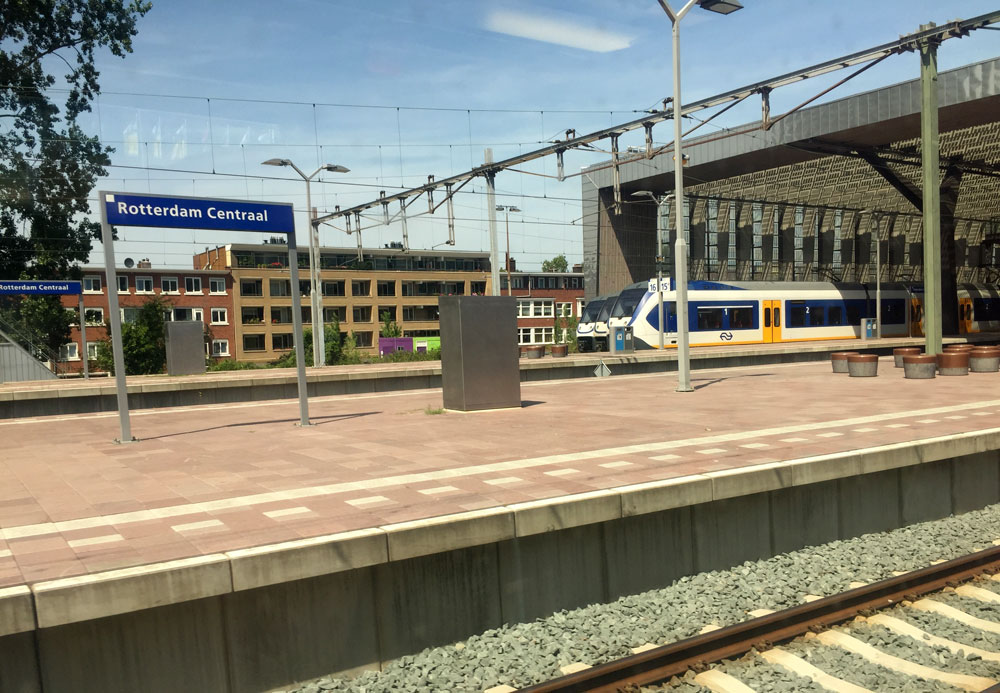 Amsterdam did prove to be lovely in the sun. The heatwave had temperatures around 30°C. After an fun hour wandering to my AirBNB, I was rather happy to relax in a nearby park (the Vondelpark I mention above) and do some reading. Oh, and go to a gay bar. 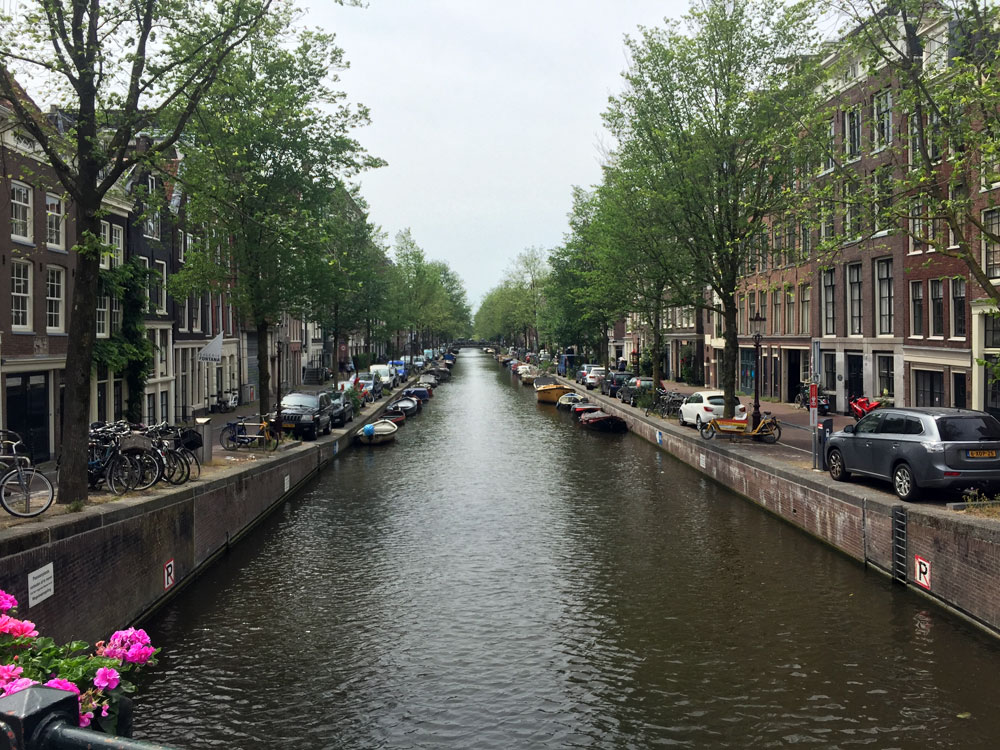 Vondelpark is absolutely gorgeous in 30°C - sadly I doubt it gets that weather too often: 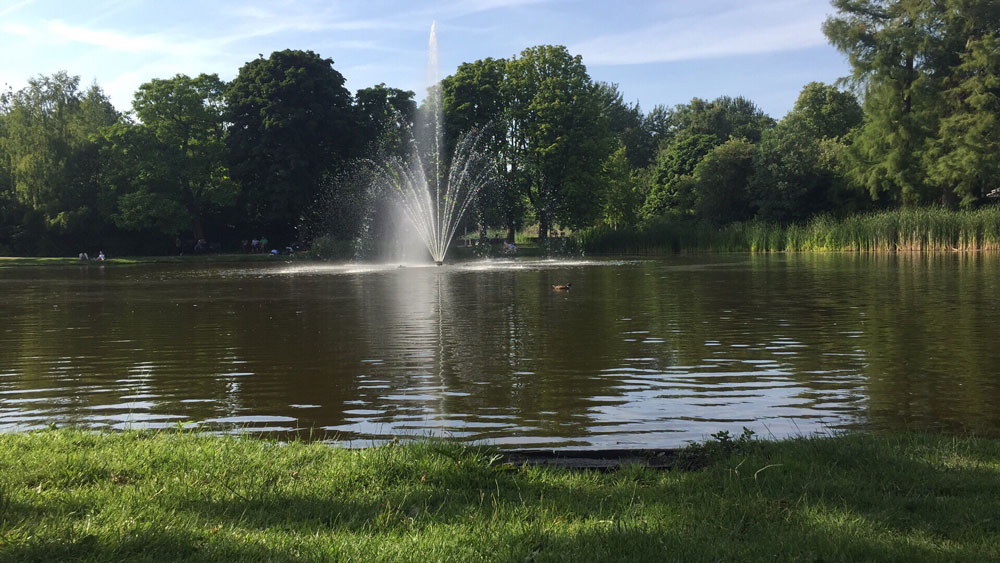 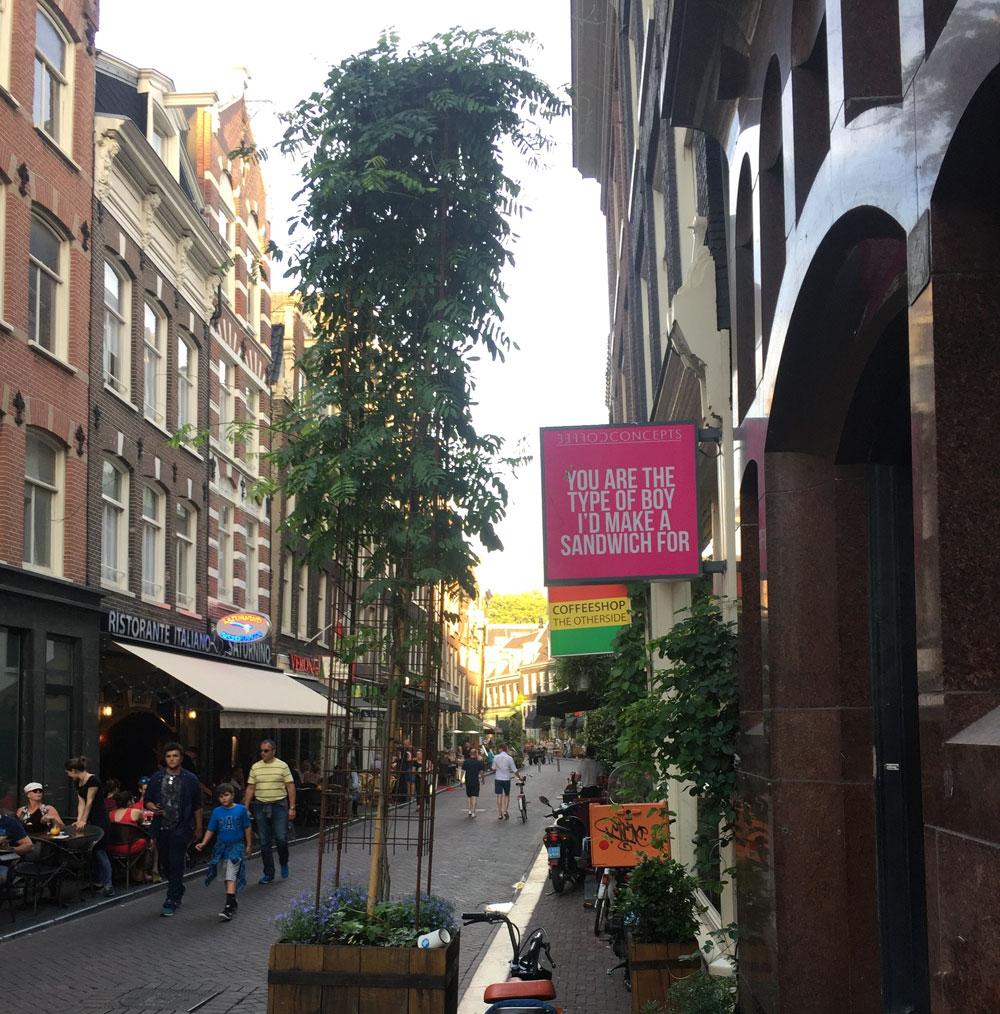