How responsible are we for the feelings of others?

I’d like to publish more of my writing, and so this post is somewhat shorter and stream-of-consciousness than I’ve written before.

The counterintuition of how leaders grow

My background is in small organisations: some fast-moving startups, but also some slower-moving organisations like research councils. Since I joined GDS I’ve been getting used to a larger organisation. A big part of that for me has been recognising how important leaders become in organising a large group of people. But a big part of that has been seeing how much help or harm leaders can do.

GDS has shown me people who I look up to a lot. Leaders who treat people with respect, are keen to grow people around them, and yet can manage effectively and see their team deliver lots. A lot of them are LGBTQ, or not male, and these traits definitely go along with forms of servant-ish leadership I appreciate.

My naive assumption for a long time was that these people were so brilliant because they’d learned it in equally brilliant, safe conditions. And yet from listening to them I’ve realised that isn’t true at all.

Wonderful leaders seem to have learned from failure. Even to have ‘born’ in failure. Many of the leaders I admire started leading in difficult situations that made them feel overresponsible, unsupported and unhappy.

My past has lots of examples where selfishness seemed to lead people to power who were intended to abuse it. I’m a believer that the best leaders are those who aren’t self-centered and wouldn’t seek power for themselves.

But that doesn’t necessarily look so straighforward in the real world. Many people, such as those in marginalised groups or who don’t try to project masculine-style confidence, don’t get offered chances that they obviously are capable of attempting. So getting that eventually requires some sort of opening.

I talked about this at length with some very experienced people. Their response was reassuring: that different people are motivated by different things, but that sometimes for anyone to get what they deserve they have to be quite assertive about it. And in particular, that personal ambition is OK. I suspect that will seem obvious to many readers, and it might feel frightening that I’m suggesting otherwise, but chat with me sometime.

So one can look for leadership opportunities. I’m vaguely convinced now that being ambitious like that is not unhealthily selfish. Finding the sort of vacuum that one can start healing is a matter of luck, but I was taught a new form of trust. If you’re demonstrating skills then you can trust people to start using those skills. Everyone’s doing their best, everyone needs help. And for awhile that’s probably going to be in a way that gives little responsibility but requires lots of engagement, but that’s how you show what you can do. And it’s how you can fail in a low-consequence situation.

So, the counterintuition is: some of the best and most sensitive and effective leaders actually learned that from bad, insensitive, ineffective situations that they felt determined to fix.

(At this point I realise I’m talking about myself.)

In December I wrote about how painful I had found it to leave York, move to London by myself, and start putting this new phase of life together. And this seemed strange, because I was evidently doing well and enjoying work and I did not objectively feel lonely.

I’ve been learning about an area of psychology called attachment theory, and it turns out that people don’t work that way. Something called the Dependency Paradox describes how people without reliable relationships can struggle to feel comfortable in their independence, whereas once those relationships are settled and reliable the same people will be independent and unconcerned. This lack is why I was feeling so upset for a time, but also why things have felt dramatically lighter in recent months.

I missed a weeknote. Interesting things happened but I went through a period of being down and having crippling hayfever.

I learned lots about leading in an agile environment

A difficulty with working at GDS is how exposing collaborative ways of working can be. There are lots of potential triggers, like teams expecting pair programming and not building in ay recharge time. There are lots of things one has to work with, such as being overwhelmed by bright office lights.

I’ve learned to work around these things. Finding recharge time can be a question of seeing yourself as being in the team rather than of it. Bright office lights can be mitigated by polarising sunglasses, and hopefully by something more stylish in time. And I’ve learned a lot along the way.

We seem to learn more from unpleasant experiences than from enjoyable ones. It’s hard to know why something successful works without asking a lot of questions, and some questions risk surfacing lingering issues and creating drama. I suppose that the people we storm with can become deeply respected and appreciated friends as things normalise.

I’ve been talking to quite a few Delivery Managers and Product Managers, and I shadowed one of my favouritest Delivery Managers. I’m fascinating by the agile team structures that we use, and their deliberate structures. I had always felt that stereotyping people into roles was oppressive, and would be suffocating to roleplay. But these structures work because people divide responsibilities—not because people are necessarily lacking in relevant abilities. With divided responsibilities comes more focus, clearer lines to collaborate along, and thus more effective teams. When you understand your role you can subvert it in ways that work for you (for instance, some Delivery Managers take a keener interest on the Product side of things.)

I’ve been talking to quite a few Delivery Managers and Product Managers, and I shadowed one of my favouritest Delivery Managers. I’m fascinating by the deliberate structures in our agile teams. These structures seem to work because people divide responsibilities, even though people might not be lacking in skills.

A good example is that Product Managers sometimes need to be “a product arse”—very outspoken in advocating for the product. This could ruin morale or burn the team out, except that other roles are there to speak out for what’s humanly and technically possible. When you can count on the other roles in a team to complement your role, you achieve more together.

I had always felt that stereotyping people into roles was oppressive, and would be suffocating to roleplay. But these structures work because people divide responsibilities—not because people are necessarily lacking in relevant abilities. When you understand your role you can subvert it in ways that work for you (for instance, some Delivery Managers take a keener interest on the Product side of things.)

GDS ask interviewing Developers about experience of leadership. I kept quiet because it isn’t necessary for mid-level, and I doubted my experiences in smaller orgs with informal leadership was relevant. At this stage: a lot of that was the stereotyped self-doubt that marginalised people get when applying for roles. The missing ingredient in applying my leadership experience to GDS wasn’t “how does one lead?” but “why do we have roles?”

This is all opinion. Much of it is influenced by others; the exact understanding is mine. I think it’s a way forward. As I learn more of my triggers, and keep finding new opportunities to exercise myself in different team situations, I’ll get closer and closer to being a credible tech lead. This might take a long time, but that’s particular to this way of working, and if I wanted I could find a different organisation that I could lead in right now. But GDS’s ways of working care about people, deliver great products, and are worth my effort to learn.

The other things I’ve been doing

I’ve said all that without mentioning what I’ve actually being doing most of the time! I think I’ll talk about that next time. I’ve done:

This was a short week. Monday was a Bank Holiday. On Wednesday I stayed at home because of sinus fatigue (hayfever sucks!) and didn’t get much done. But I did some proper infrastructure work this week.

Since joining GDS I’ve learned a lot about infrastructure and ways of working like agile and XP. And I’ve contributed a lot back to my team from that. But after 10 months I needed to get some wider context, and see how other teams work. To that end I’m helping a product team deploy its infrastructure for private beta. 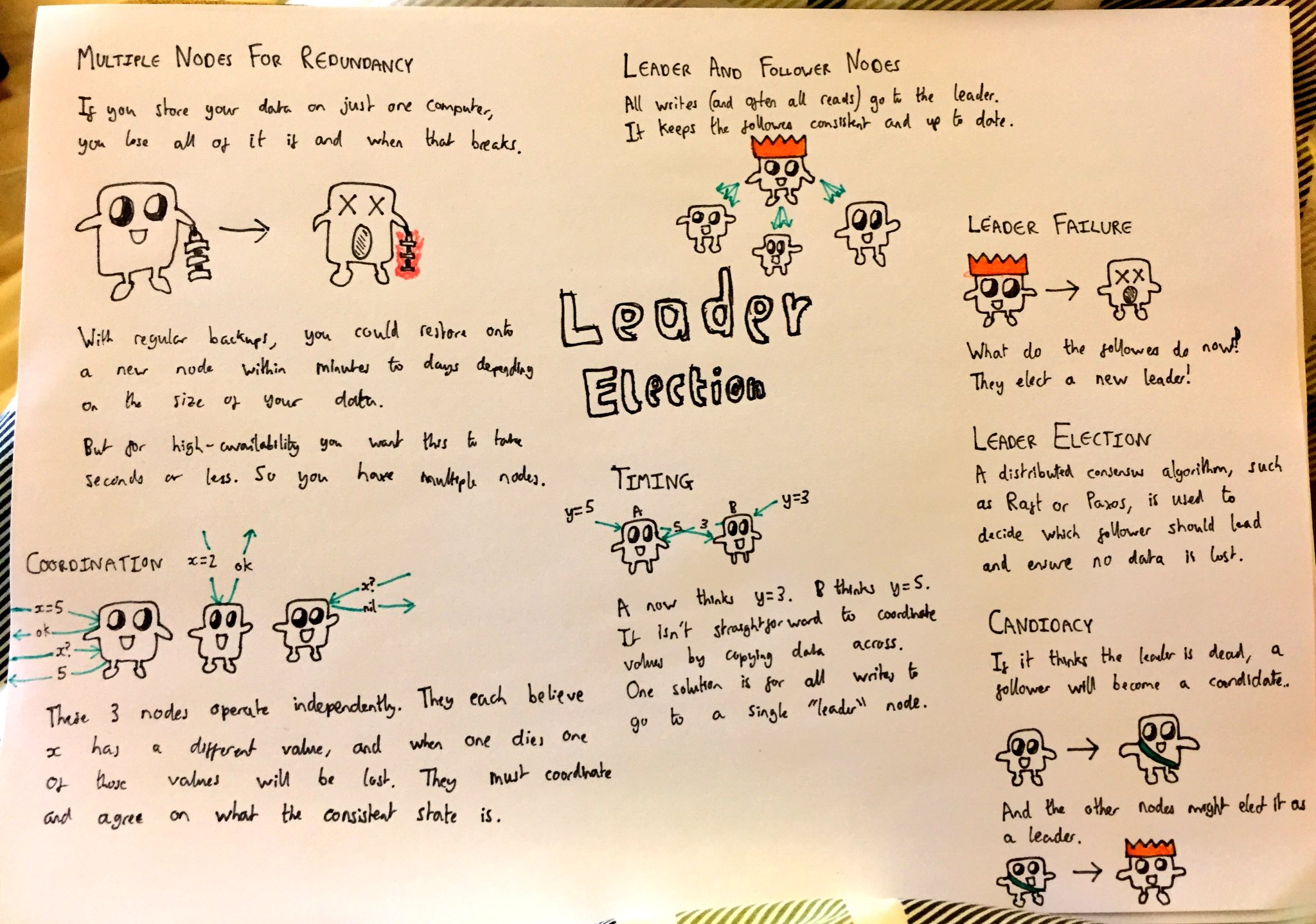 I’ve decided I want to try Sketchnoting. I don’t have much experience of drawing things, and I thought a friendly character would be a good start. So I focused on finding that character first:

I have my characters! pic.twitter.com/nGySx8vzJb

When I started web development in the early 2000s, your typical medium sized website ran on a single codebase that ran in exactly the same way on a few webservers. The frontend, things like accessibility and JavaScript, felt like novelties.

It’s been quite the Winter for snow in North London. My first winter here has been just as lucky as was my first in York, which is when I took this photograph.