Previous days have been written in retrospective, as there’s been much to do and by some bizarre bad luck I managed to go away without a pen! Today however I’m able to write from trains, and between yesterday evening and today I’ve caught right up!

Today’s plan was simple: get up around 9am, finish packing, go to Amsterdam Centraal station and catch a Deutsche Bahn InterCity train to Hannover.

Why Hannover? It’s about halfway into the 6-hour train from Amsterdam and Berlin, and is host to The Royal Gardens of Herrenhausen. It’s also in the West of Germany, in the countryside, and smaller than the capital cities which otherwise make up my trip - therefore different and interesting.

The 30°C summer weather has definitely broken. I got up to find it wet and drizzly outside. As a result I’m wearing both long-sleeves and trousers for the first time this trip! I only have one long-sleeved item so hopefully it won’t be needed for long, although I am doing laundry in Berlin tomorrow so it might be workable. 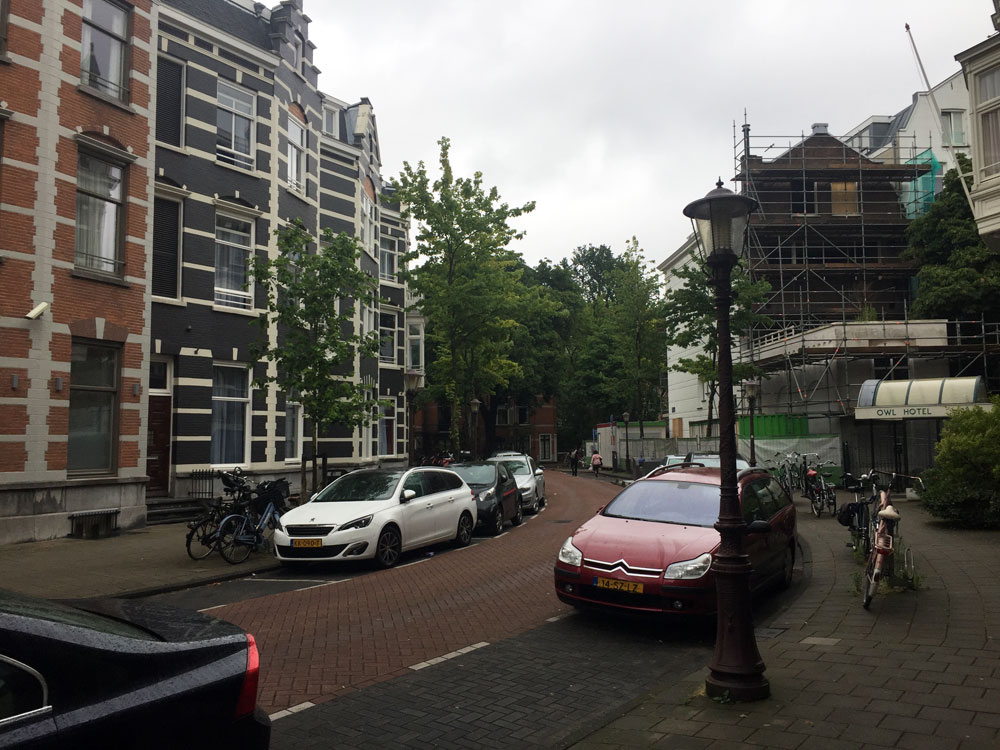 I set off around 10:40am with a few hours to spare before the train. First stop was getting some cheap lunch from a supermarket - I’ve discovered the Albert Heijn chain has a big store near where I’m staying. For €3 they sell a very nice “Eggwrap Gerookte Zalm.” I’ve yet to translate that, but it’s sort of like an omelette wrapped around salmon, spinach and egg.

In Hannover I’m staying at a very nice hotel for one night, as it’s a somewhat cheaper city and therefore the cost is much less. They have a lovely-looking restaurant serving proper German food and I’d like to try it, so despite a mile of cobbles and worse I walked/carried my suitcase to Centraal to save money over getting a taxi.

Diverted to the Ruhr

Once there I found an email from Deutsche Bahn warning of disruption to my journey. I then discovered my 1pm train no longer started from Amsterdam but from someplace a long way East into Germany! I wasn’t entirely sure who to talk to but ended up at the International Railteam Service Desk inside Centraal.

I got three answers as to what to do. The person handing out tickets to wait for help said I’d need to catch a domestic train and then a bus to join my train later in the journey (ew!) The other person near them said I could get the 3pm train instead, which wasn’t reassuring when discovering the 11am had also been disrupted. Somewhat worried about the hassle of a bus journey, I was pleasantly surprised by the helpdesk.

After about 30 seconds my number got called by the helpdesk. Their immediate reaction was really rather annoyed - they evidently hadn’t been told about the disruption and had no information on what to do. They quickly rang someone up in German, presumably Deutsche Bahn, had a lively discussion and then offered me an alternative rail journey that got to Hannover at about the same time.

That new journey Amsterdam–Duisburg–Hannover has turned out to be a lot of fun. I’ve been taking two ICE (InterCity Express) high-speed trains. The first is on the most modern ICE trains on the Amsterdam–Frankfurt route. The second is a slightly older ICE train running the Frankfurt–Berlin route, the same one through Hannover that I plan to get tomorrow afternoon to Berlin!

I’ve noticed today how The Netherlands has a lot of sound barriers around its trainlines near settlements whereas the UK, France and Germany seem to almost never have them. It’s a real kindness to the villages and towns one passes though, particular if at night, although it does rather prevent photos! 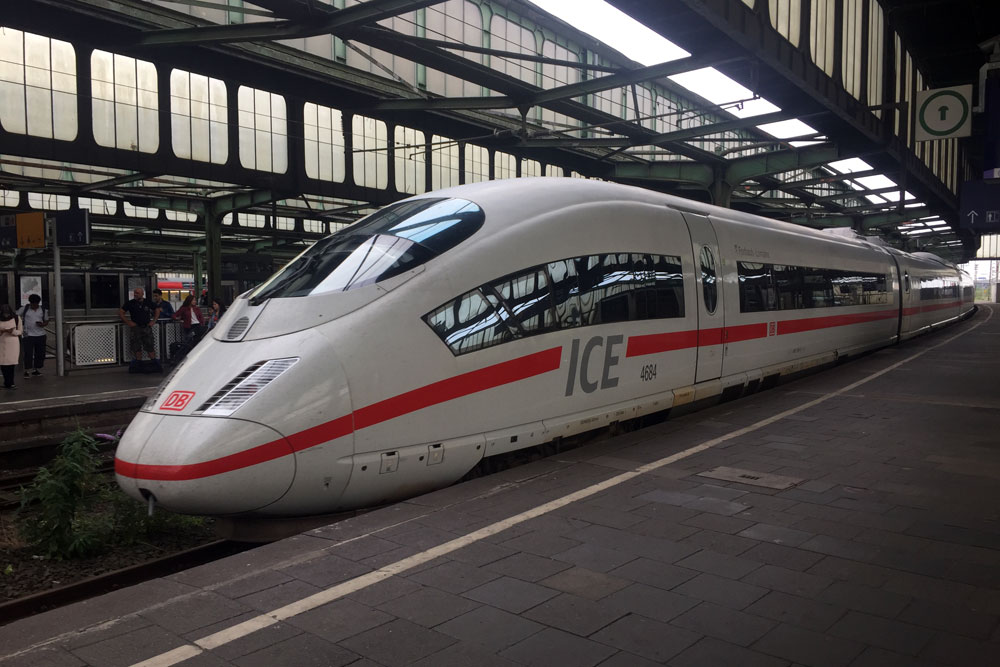 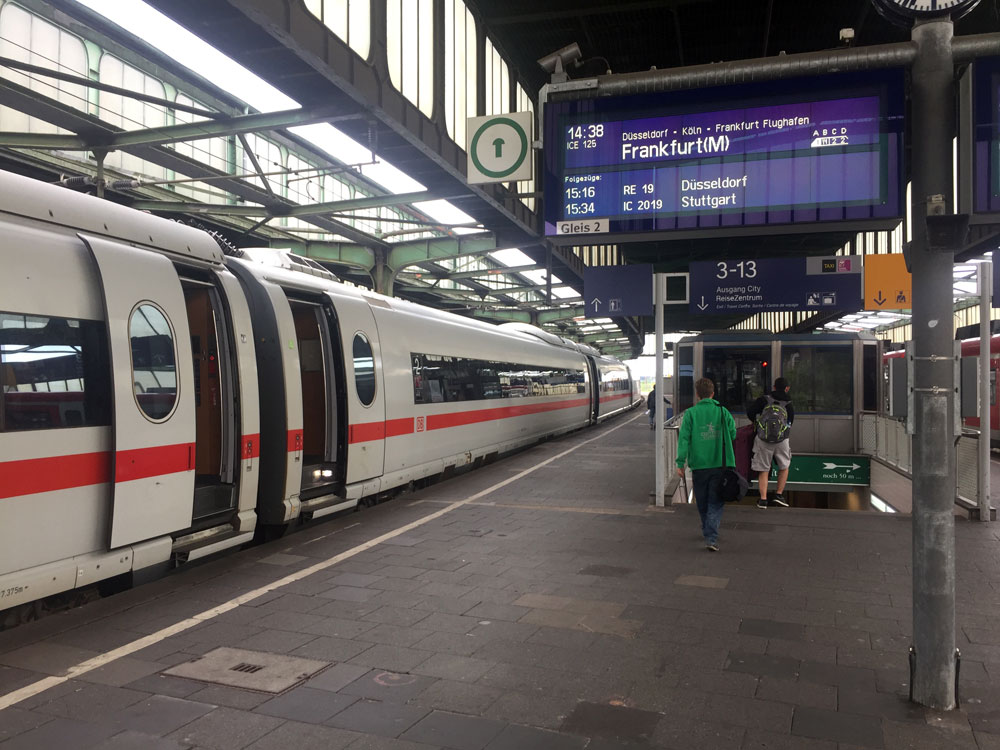 My friend is named after Doorn, a village 5 miles in this direction:

Getting on ICE trains for an extra four hours has been quite comfortable and interesting. In Duisburg I talked to someone from Holland for half an hour about the local area. I’d found myself in the Ruhr, an industrial area of Germany that was singled out for crippling in the old Treaty of Versailles… anyhow. Apparently the locals describe themselves as being from “the pit” because it is such a big coal mining area. 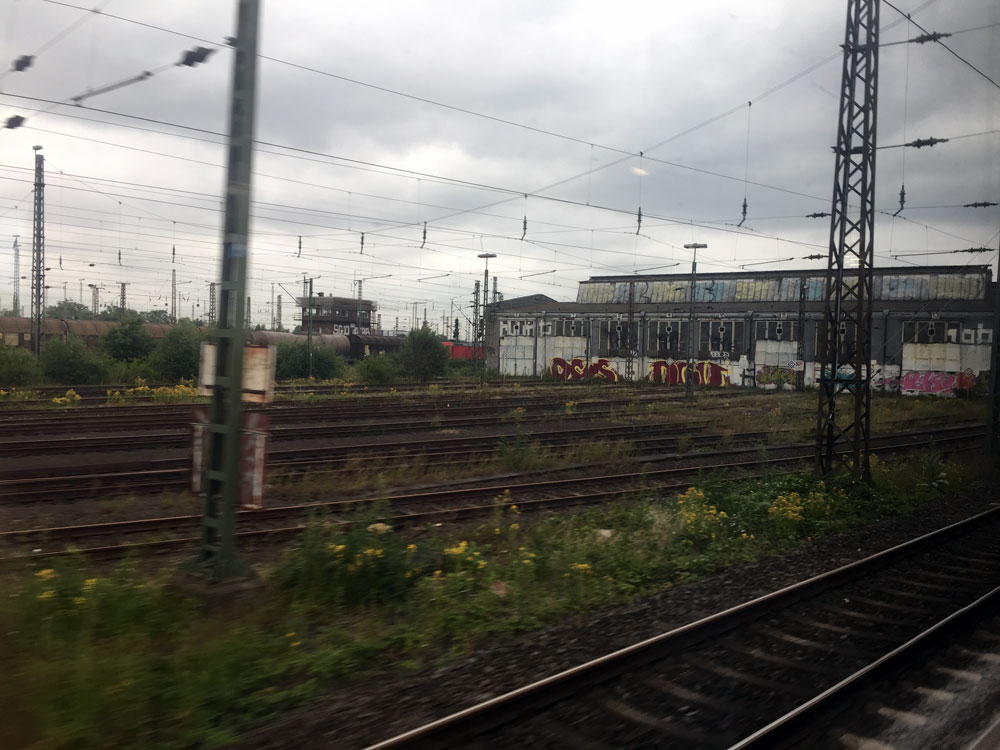 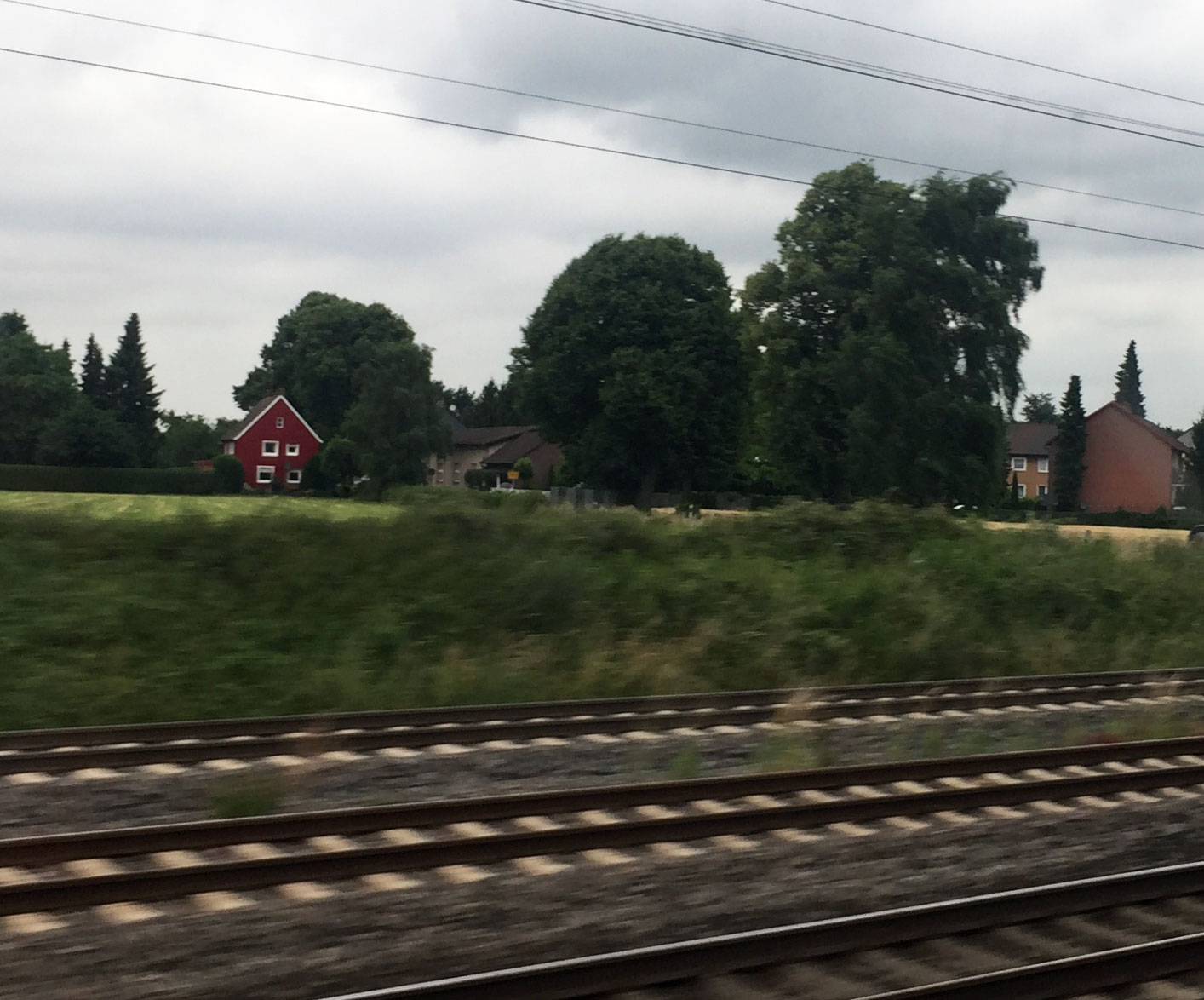 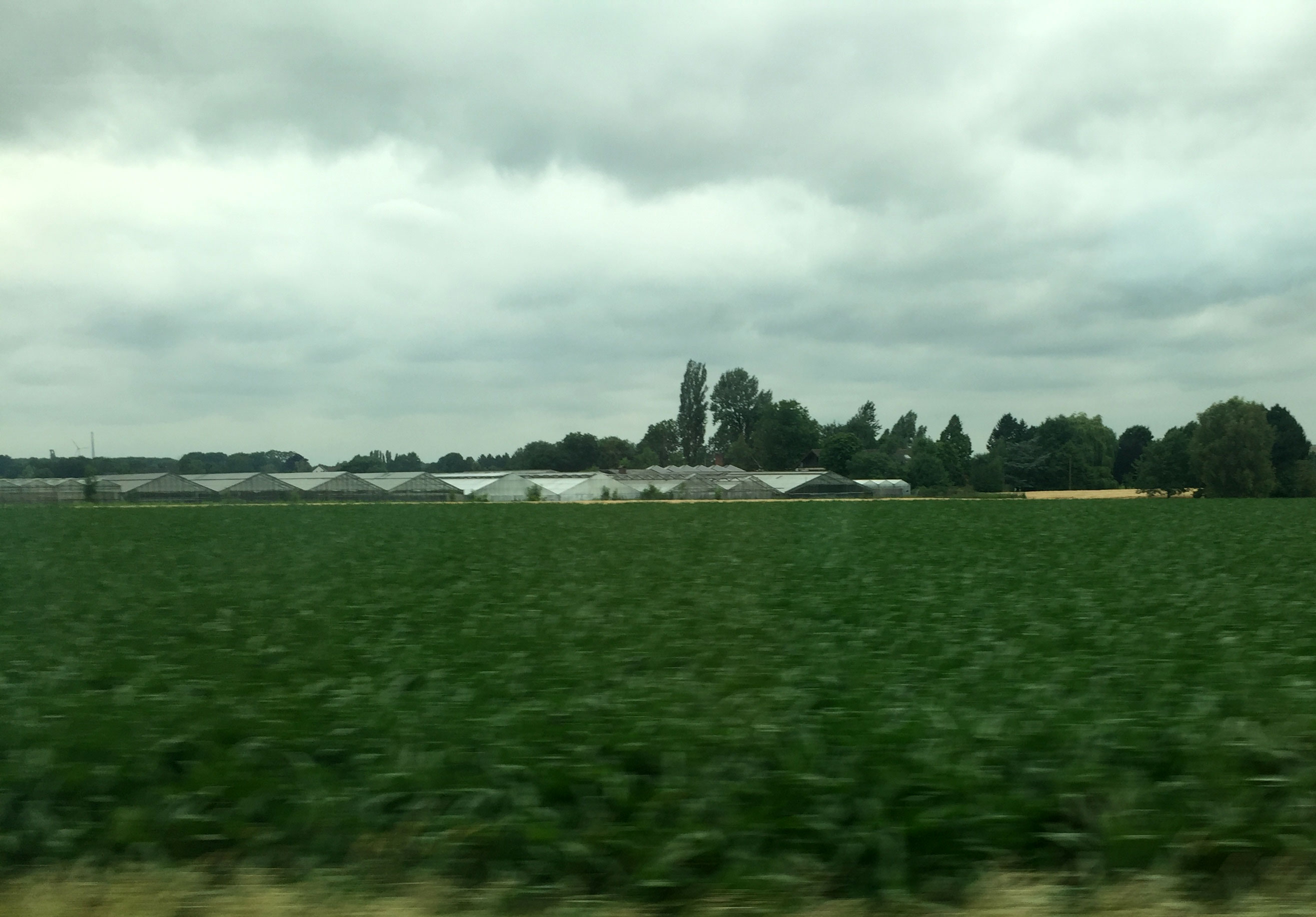 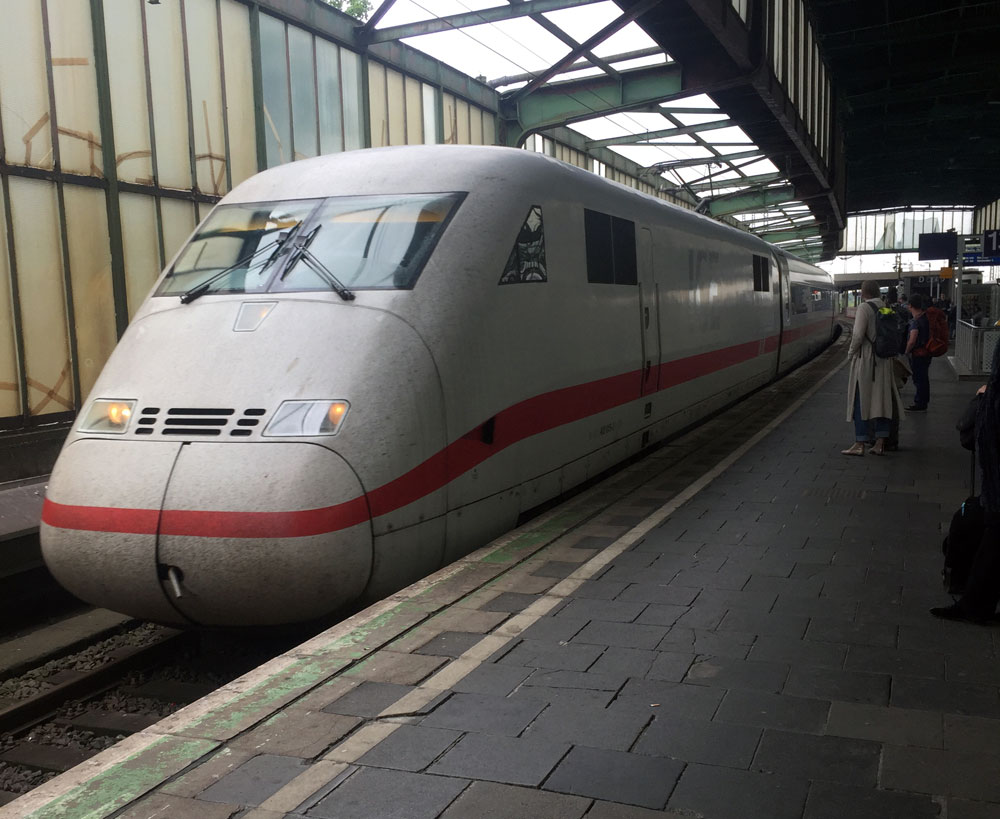 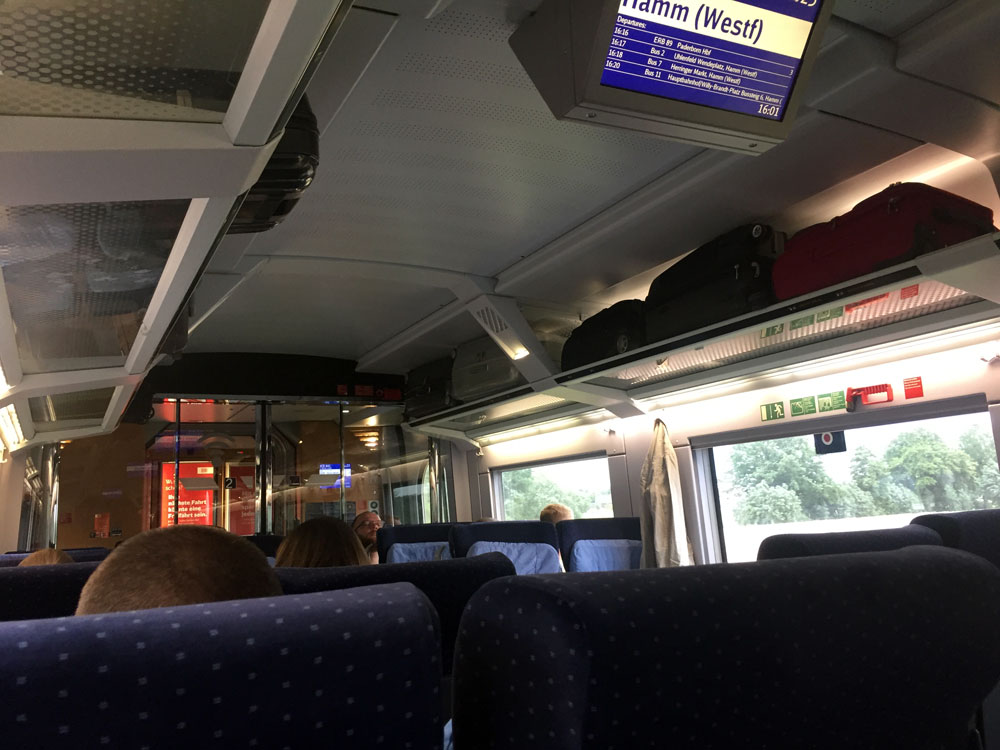 As we speak I’m bound for Hannover, the last stop of this train before Berlin. I am slightly tempted to rejig hotels and just go to Berlin now, but I built this pitstop in to see something which wasn’t a national capital (it’s still the state capital of Lower Saxony), take a little time out and see formal gardens, a lake and a forested park. I think it’s probably a good idea!

We just stopped in a place named Hamm. 80 minutes to go. 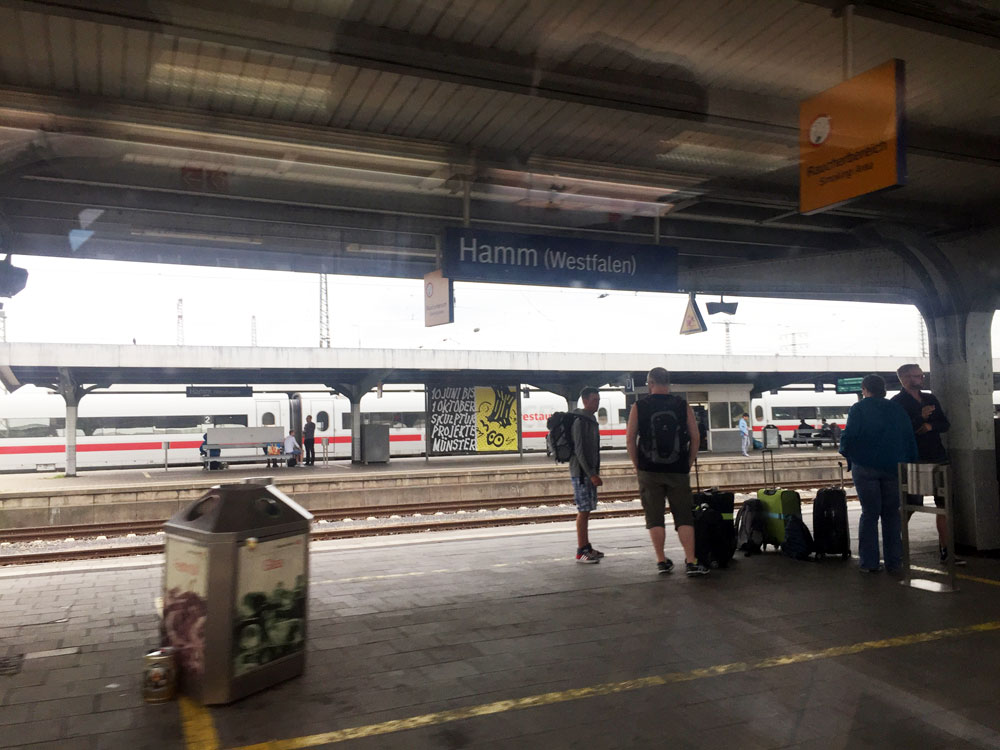 An evening in Hannover

It seems like a really nice place. I dropped my bag off at my hotel opposite the Hauptbahnhof and then went to explore. This first shot is of a tunnel connecting the Hauptbahnhof to the central U-Bahn station. 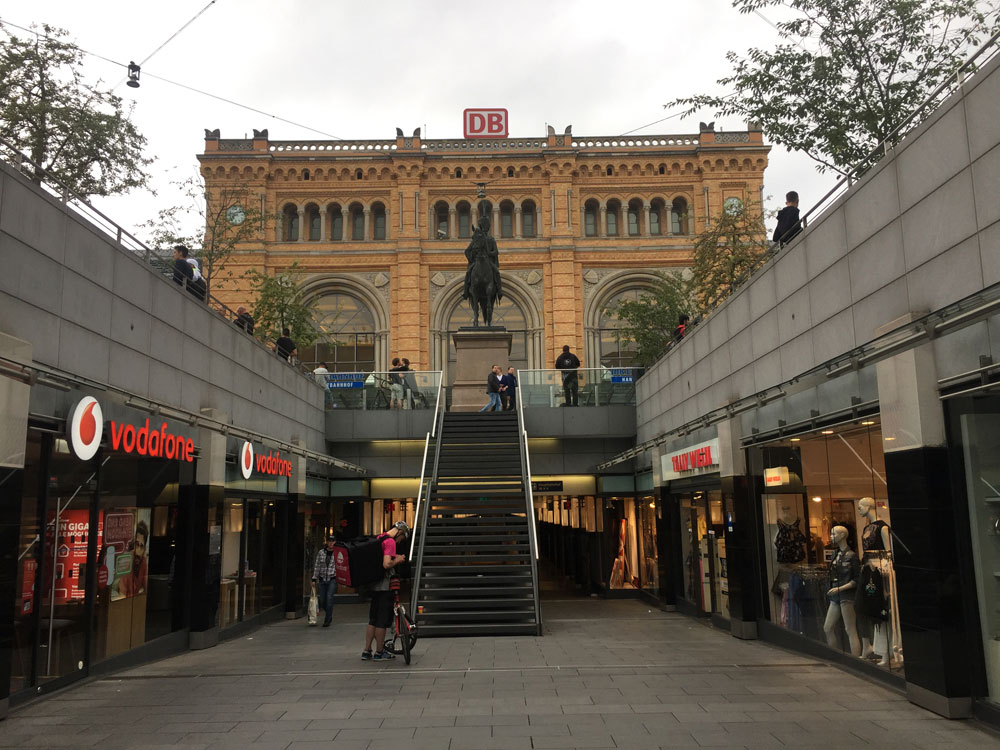 I spotted a huge church of (to me) unusual design in the distance and went to investigate. This is the Lutheran Marktkirche. It’s really hard to convey how large this building is - far larger than it appears in photographs. 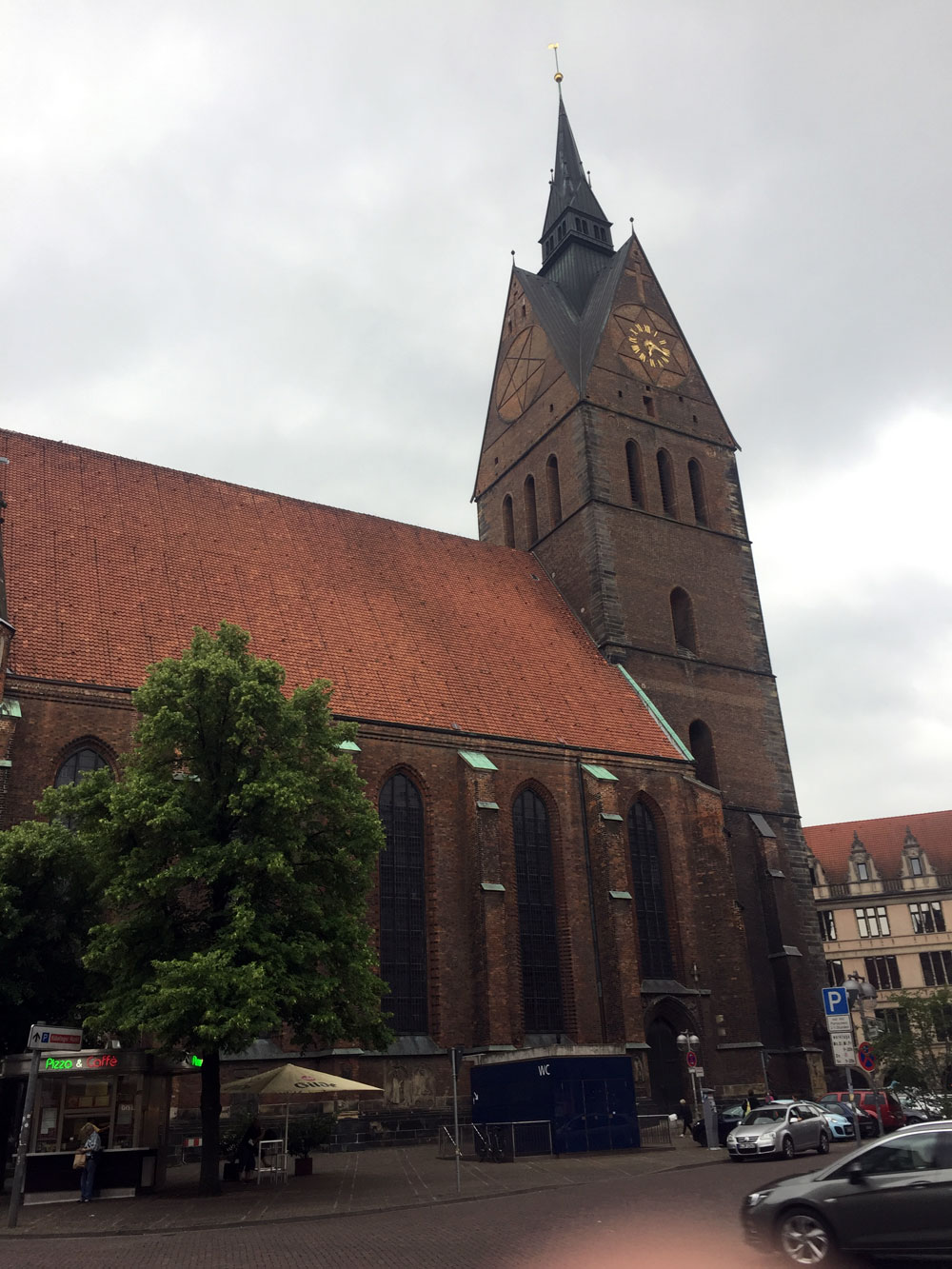 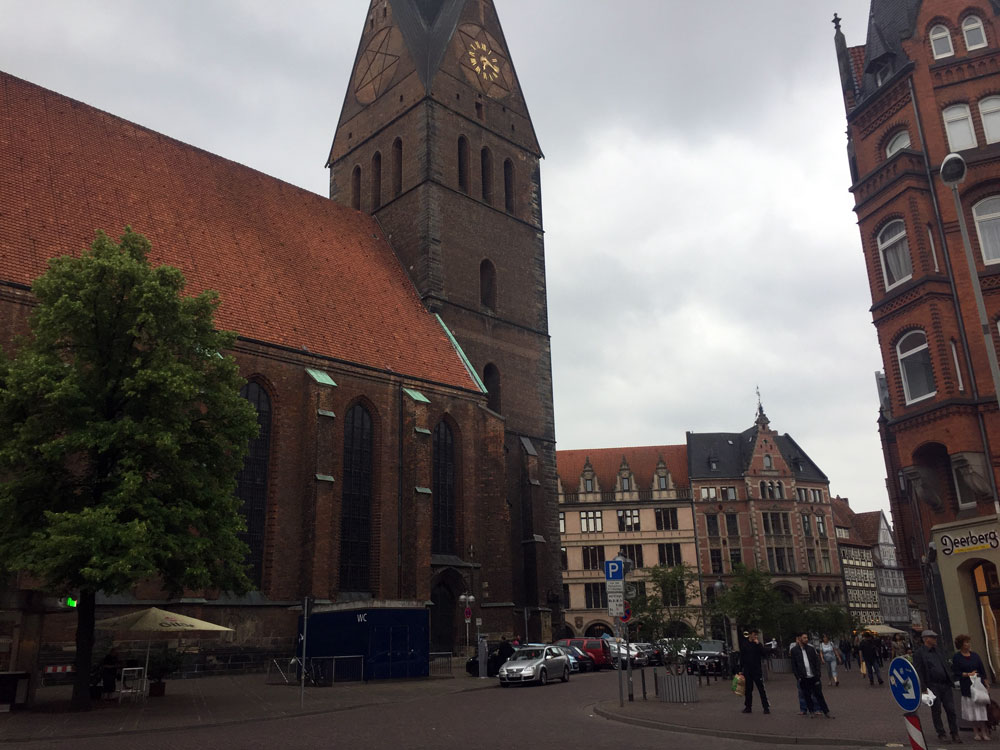 I headed for the Maschsee, a vast lake to the south of the city centre. Along the way I saw the Old Town Hall, again with architectural features new to me. It was rather exciting. 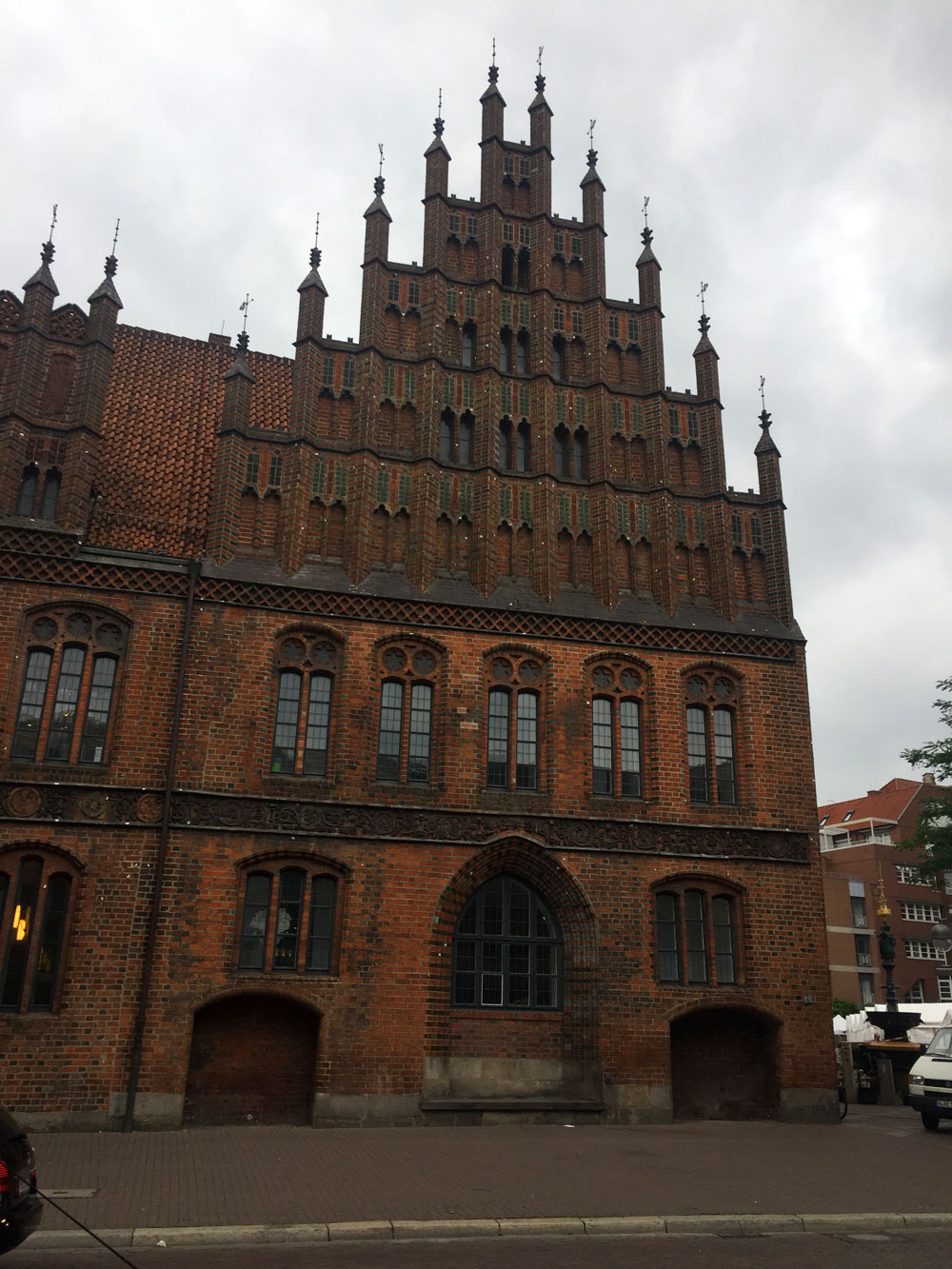 The New Town Hall is vast and impressive. I was momentarily stunned. 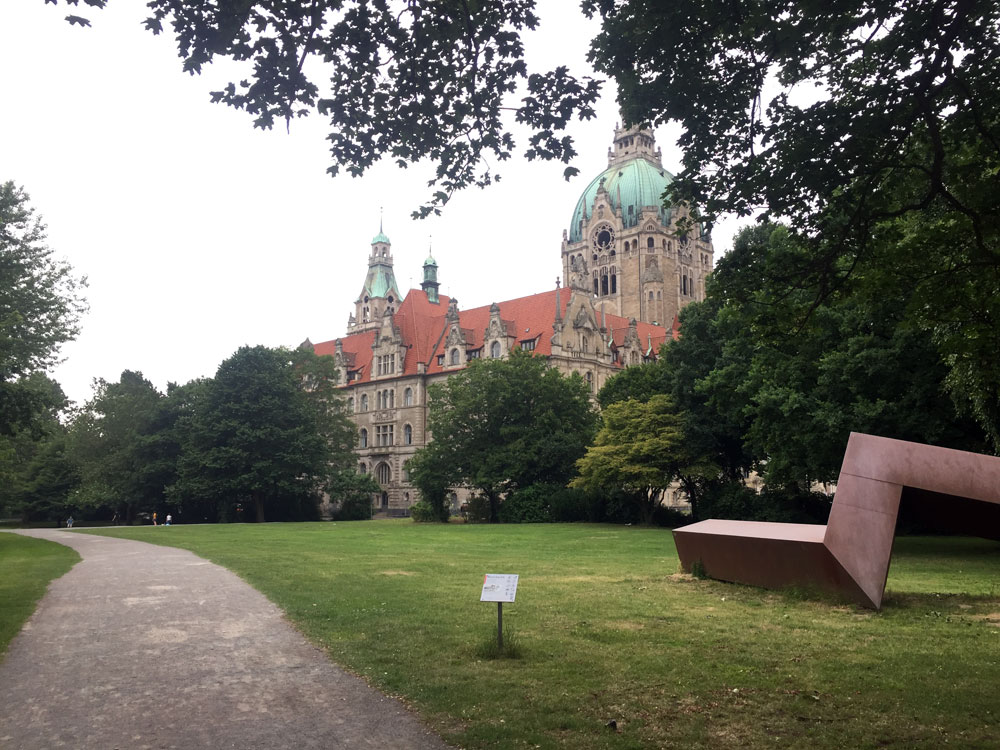 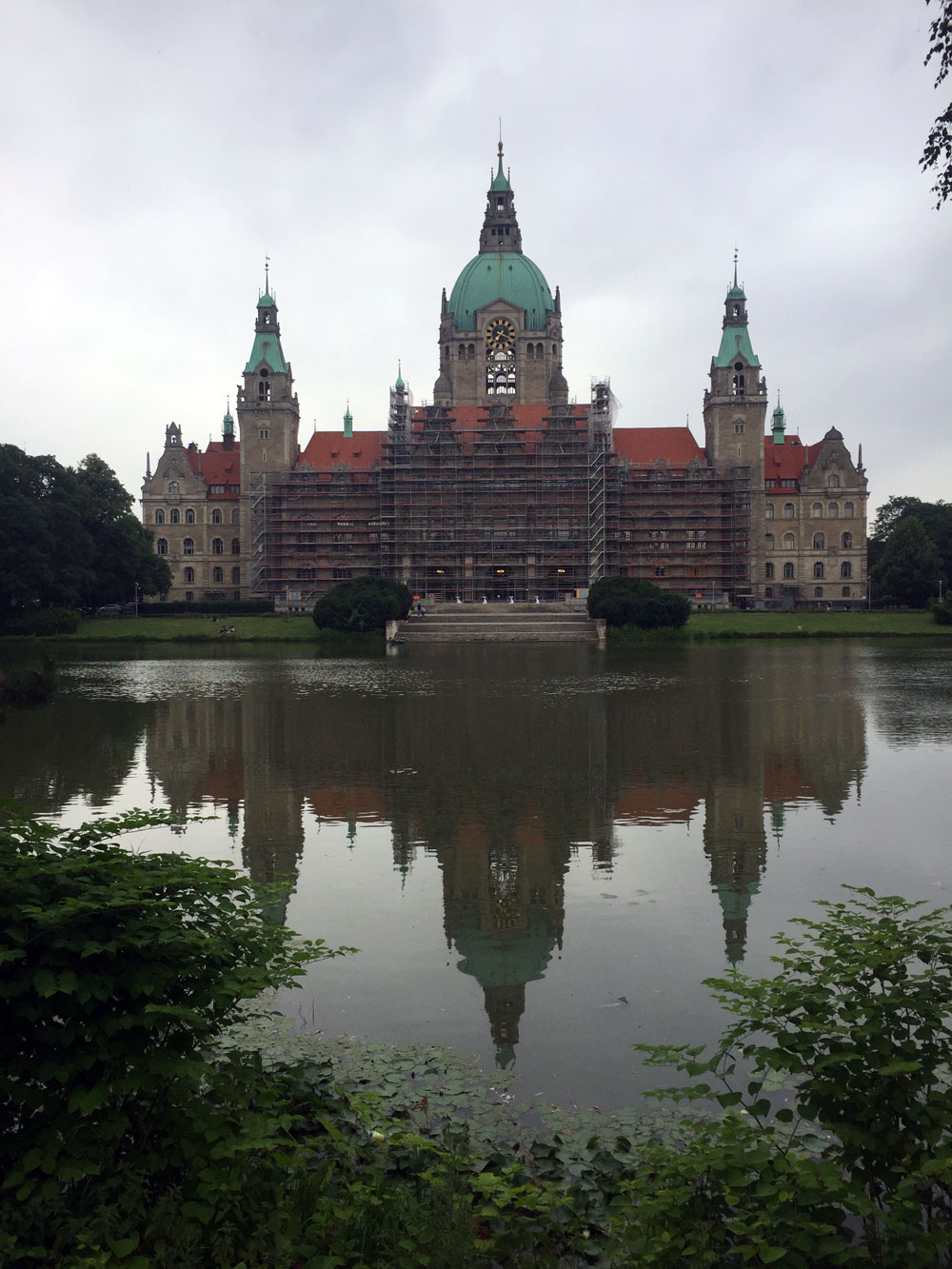 Reaching the Maschsee I was stunned again. It’s about 1.5 miles long, an unusual sight when right next to a landlocked city centre! 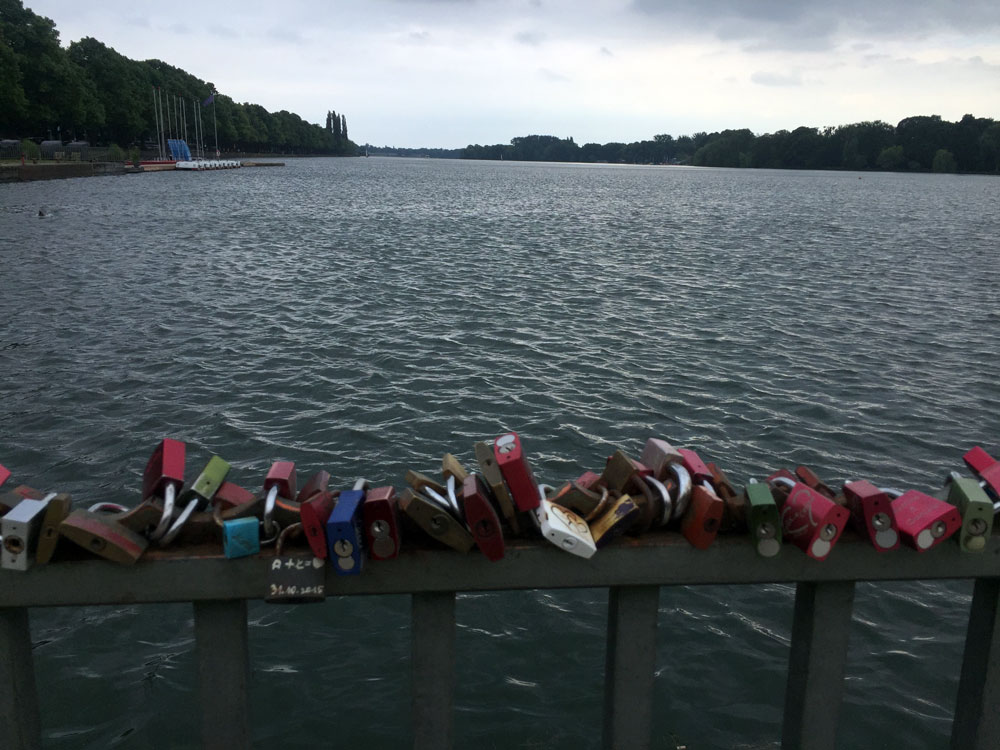 At the near end are pitches to play Kayak polo and a championship match was underway! 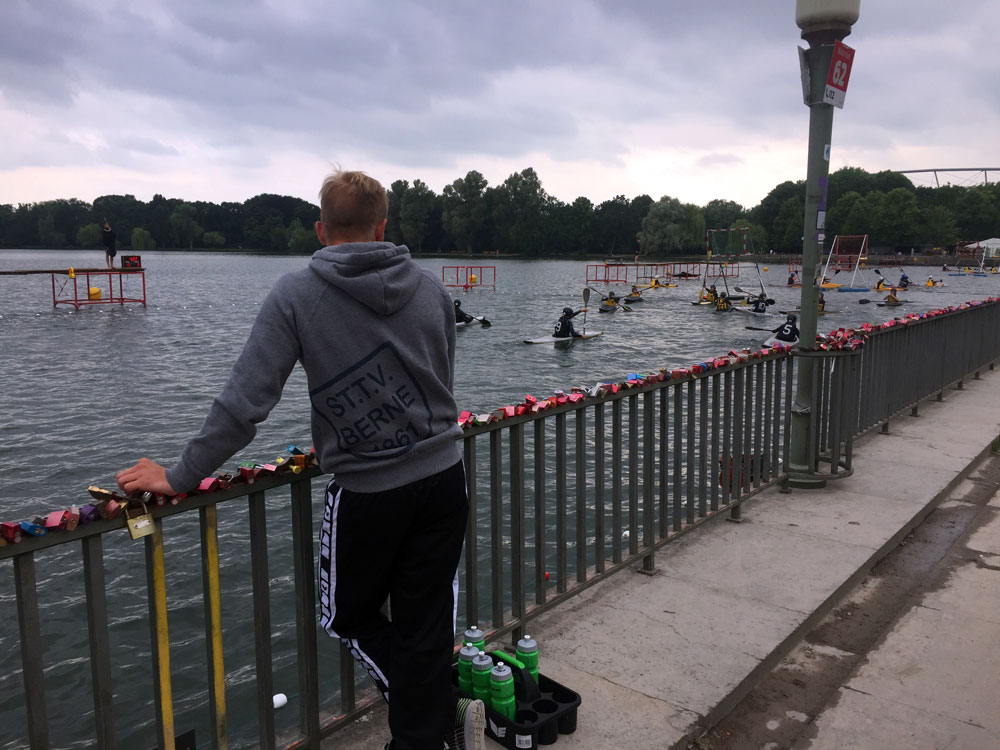 The park of the New Town Hall is quite charming. It is almost marshy, reminiscent of University of York’s older campus that I know and love. 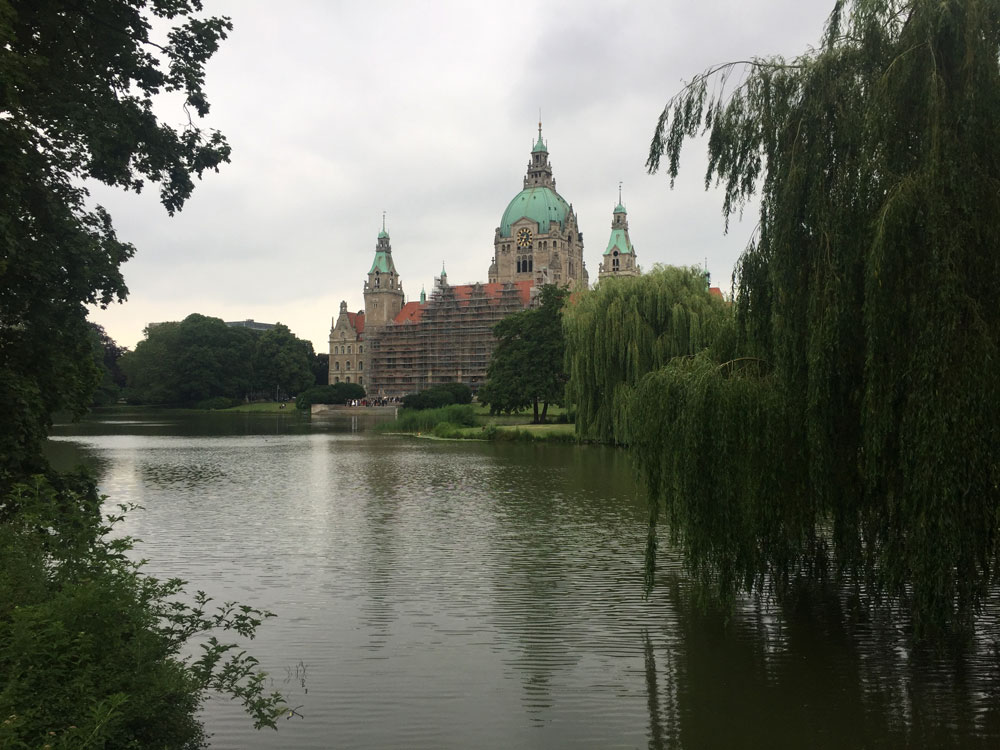 I’m already very glad to have made this stop in Hannover, and there is still The Royal Gardens of Herrenhausen to come tomorrow. It’s different to the capital cities I’m visiting, but far more ‘real’ while still quite modern and cosmopolitan. (Also, I got a very good deal on the hotel and the mood-lit shower plays Raindrops Keep Falling On My Head!)

You might wonder why I keep typing Hannover rather than the anglicised Hanover. I got in this habit because none of my reservations show up if I search for Hanover!